I don't have a particular afinity for cars, but there is one I like very much. This is, of course, the Ferrari F50. Everything about this car is just "correct". The curves and lines flow in perfect continuity, from front to back. To hone my modelling skills, I decided to model it. Here is the result (click images for the full sized version):

I also decided it would be fun to merge a rendering of this car with a real fotograph. So, I took a picture of our driveway and imported it into Blender. I had taken some measurements of our driveway to be able to model a crude version of it in Blender, for shadow projections and aid in camera placement. After some fiddling, I was able to match the virtual world with the fotograph quite nicly. 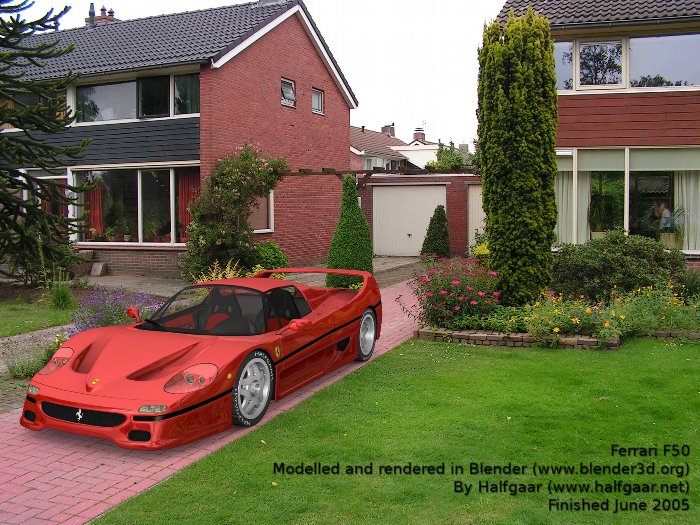 I also experimented with setting it up for animation. In the end, I didn't come up with a rig that would work well enough, but I did make a small test which looks pretty good, if I may say so myself. It's just that it wouldn't be suitable for more complex animations. I made this test some time ago, but I never rendered it. I decided to do so after all, and here is the result (I zipped it to avoid it being opened as a streaming video). The video is coded in h264. I won't be making a divx/xvid version, because I didn't spend more than 24 hours rendering frames with full ambient occlusion, to ruin it with a low quality codec. I wouldn't know which codec package is the best to install for your platform, so I'll leave that to you.

For the curious ones out there, a wireframe of the model: 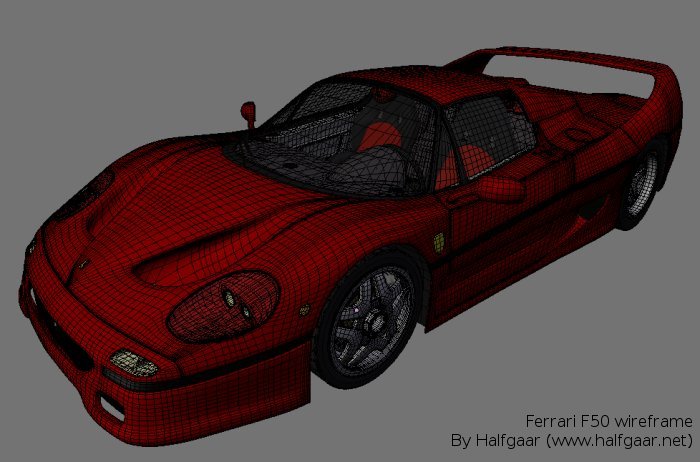 I don't really know why, but the previous version of the sources I made available, didn't include the textures. They do now. There are no skymaps or other environment details (except for a white sky plane and some test lights), so you'll have to add that yourself. Other than that, it is completely usable as-is.