Nowhere on the internet could I find a review with some useful information about the APC UPS CS-650 (or the lower power models CS-500 and CS-350). That's why I decided to write one now that I have it. I'm not going to perform tests like how long it can run on batteries, since APC specifies that accurately enough.

The APC CS models are so called "off-line" UPSes. That means that normally they run on mains power and switch to battery power when there is a power failure. Because it is one of the cheaper models made by APC, it's one that uses a stepped sine wave as output. Some people advocate this as a very bad thing, but that is not always the case.

Besides ordinary tests like testing if the computer crashes, I subjected the UPS to the following additional tests:

The details of the tests and the results are as follows:

I of course wanted to see what the output waveform looks like. I tested it through a transformer, so it's possible the waveform is a bit distorted. 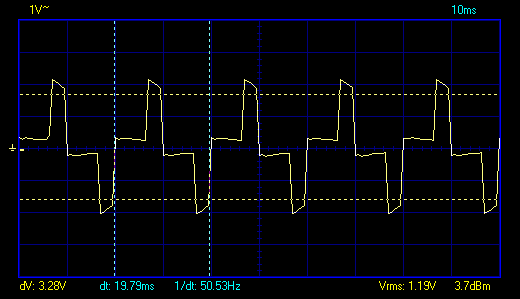 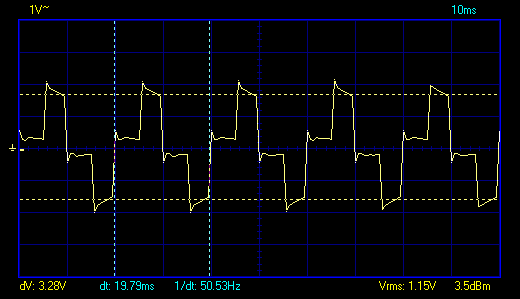 As you can see, Vrms and frequency are reasonably accurate. I was worried a bit, because the chinese version of the UPS has an output frequency of 120 Hz, according to APC. In true chaotic corporate website fashion, the output frequency of the models for other parts of the world weren't mentioned and because China doesn't have a 120 Hz power grid, I was confused.

To try to solve the EMI problem, I contacted APC. They didn't even want to acknowledge that electro magnetic interference was the problem of the USB disruptions. They said that the EMI in the kernel log meant "external machine interface". Consequently, the EMI problem was never solved. They did, however, give me some other useful information. They sent me a document (in Dutch) explaining how this UPS is incompatible with power factor corrected devices, which all computers are nowadays. They said that because of the power factor correction, it's very easy to overload the UPS and that it may fail prematuraly. I don't load the UPS to anywhere near its maximum, neither in watts or VA's, so I guess it's not a problem, but this information was conveniently left out of the product specifications APC published.

One thing I had not considered before buying a UPS, is the noise it makes. This one makes a high pitched buzzing sound, or whine. Because my computer is very quiet, it is very noticable and annoying. I sprayed the offending coil with plastic spray, which seemed to help after a few days (after the spray hardened and lost its smell), but oftentimes, it returns. Now, years later, the problem is still there; I was never able to fix it. Another downside of the CS series of APC UPSes is that they don't support delayed activation of the attached devices. In other words, when the battery has been completely drained and the power returns, the outputs are immediatly activated. The problem with that is that there may not be enough battery charge left to shut down the machine when the power fails again. I worked around this a bit by configuring that I want the computer to be shut dow when there is still five minutes of battery time left. This will make sure it can handle another boot and shutdown cycle.

Yet another problem, at least with the linux software, is the fact that when power returns when the computer is already shutting down, it doesn't turn its outputs off and back on. This is because the killpower command to the UPS is given only after the computer has finished its shutdown procedure. In my opinion, it should be given with the shutdown procedure, because the UPS allows for several minutes of gracetime to allow the computer to shut down cleanly, which should be enough. With the killpower command, the UPS shuts itself down after the computer has been shut down and goes back on when the power is back. If you have configured the computer to power on when mains power returns, it will start again. But because the UPS doesn't switch the outputs off and on when power returns during the shutdown cycle, the computer will remain off. I don't know how the windows software handles this, though.

If you need to run your UPS on a generator, you might want to consider using an on-line UPS. This has to do with the fact that off-line models often switch to battery when the input frequency is not precise. And because generators often create an imprecise frequency, it will always run on batteries.

When I had the UPS in use for a while, I began to notice that sometimes, it induces a lot of noise in my sound system; the same pitch and pattern of the aforementioned whining coil. When it does, I have to unplug the USB cable from the computer for the noise to go away. The strange thing is that it doesn't do that all the time.

In fact, the problems were so annoying, that I chose to decomission it. There were just many problems so I decided I was better off without this particular UPS.